Show preview: Ghostpal, Ariada and No Shoes at The Empty Bottle, 6/25 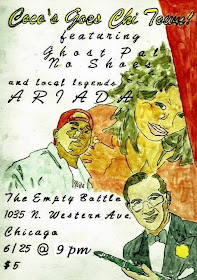 Our friends over at the excellent blog Music. Defined. have put together an awesome gig at The Bottle that will mark the first Chicago appearance by Brooklyn psych-soul outfit Ghostpal. Featuring former members of The Hysterics, Ghostpal blend influences like The Beatles, Sly Stone and Brian Wilson for a sound that's akin to Sondre Lerche singing songs written by Rufus Wainwright while backed by Of Montreal. That's a mish-mash of sounds I just threw at you, but the end result is anything but sloppy. Ghostpal's recently released record This Was Ghostpal is a devilishly seductive listen; a professionally executed, ridiculously infectious album that'll settle effortlessly into your personal playlist of favorites.

Also making the trip from New York is "post-apocalyptic pop" band No Shoes, who sound like a sandwich of Mines, MGMT, Animal Collective and Paper Mice. Another jumble, another fascinating result. Those sounds are all at work their cover of Basal Gang's "Sean The Paul," which starts off in a romp of Dionysian mischief with a twinkling hook, then grows these sort of nervey, math rock appendages that yank the song through a staccato jam. If that sounds like it'll be cool to see live, that's because it will, especially for only 5 fucking dollars.

Performing betwixt those two NYC acts are Chicago's very own Ariada, a soul group with a big, big sound. Driven by a combination of stellar songwriting, danceable beats, Lesleigh Arratia's massive vocals and a sweltering brass section, the group threads elements of ska, funk and rock into their extremely catchy tunes. Music. Defined.'s Josh Terzino writes of his first time seeing Ariada live: "They really blew me away. It was an opening set with the swagger and confidence of a headliner. They were super tight, but loose enough to keep everything fun and funky."

I really don't see what else you could ask for for 5 bucks on a Wednesday night. That said, I'll see you there.